Women's strikes in Switzerland: from one 14 June to another

It is 14 June 2019, and a purple wave is sweeping the streets of Switzerland's largest cities. In fact, it's the second time that Swiss streets have been bathed in purple, the colour of the women’s movement. The first time was 28 years ago, in 1991. A vast number of Swiss women are demonstrating for their rights, specifically – equality. Strikes are relatively rare in Switzerland, as the right to strike is subject to precise conditions listed under Article 28 of Switzerland's constitution. Before it comes to a strike, labour conflicts are often resolved through mediation between the unions and employers. Why are women's strikes an exception in the history of Swiss labour disputes? We look back at two historic days of mobilisation in a country seen as a model of social harmony.

On 14 June 2019 several hundred thousand women – and several thousand men – again took to Switzerland's streets in protest. In scenes that mirrored the 1991 demonstrations, many of the protesters were marching the same streets for the second time, some now accompanied by their own daughters 28 years later.

On 14 June 1991, hundreds of thousands of women from all over Switzerland and from all shades of the political spectrum took part in a protest and strike movement to demand their rights. According to the Historical Dictionary of Switzerland, it was the biggest public mobilisation since the general strike of 1918, and remained so until 2019.

The 1991 movement was launched by women employed in the watchmaking sector in the Vallée de Joux, who were demanding equal pay. Ten years after the article on equality between men and women had been written into the Federal Constitution, wage parity was far from a reality, even though this article specifically mentions the right to equal pay for work of equal value.

The choice of 14 June was not arbitrary. On this date in 1981, the Swiss people had approved a new constitutional article on equality. Ten years on, and women were still demanding equality in the broadest sense. Their mantra: ‘Les femmes les bras croisés, le pays perd pied’ (When women fold their arms, the country loses its footing!).

In addition to the application of the constitutional article on equal pay, they wanted equal educational opportunities, freedom from sexual harassment in the workplace, equal entitlement under social security law, more childcare places, better school hours and fair sharing of domestic labour. They also called for an end to sexual violence, sexist advertising and pornography, and effective measures against rape and domestic violence.

Mobilised for another 14 June 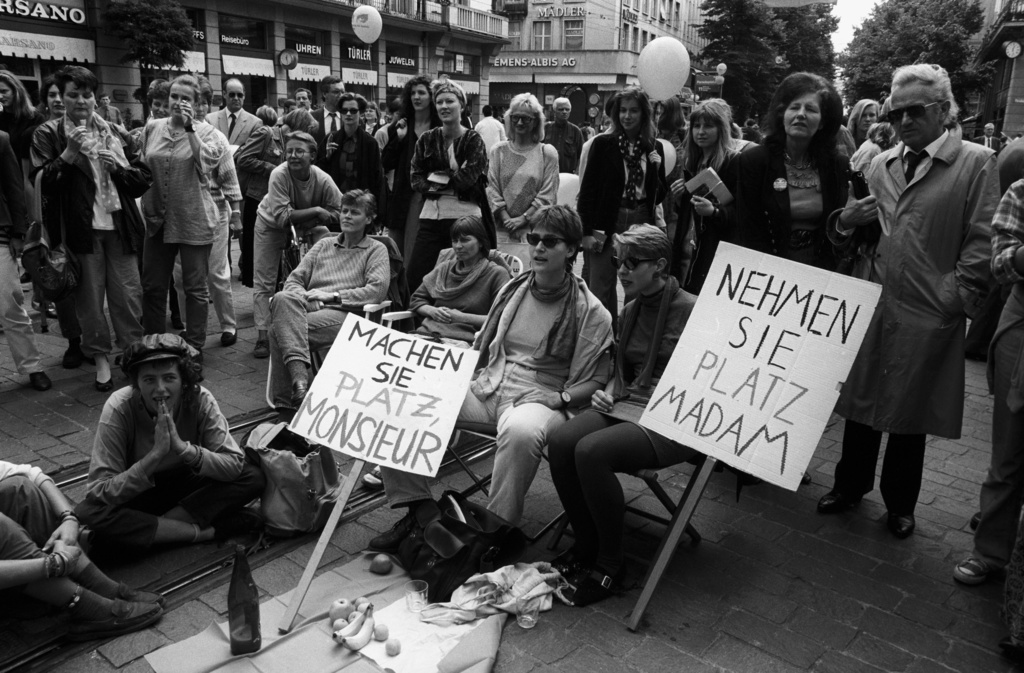 The strike was organised 'à la Suisse', with various activities planned in a decentralised manner all over the country. Some of the activities listed in the Historical Dictionary include extended breaks, flying banners, wearing a badge of support and 'arms-crossed' demonstrations.
Some women downed tools for a moment, while others gathered in their workplaces, in the street, in public squares, and in front of factories, shops and businesses. They organised demonstrations, sit-ins, performances and street meals, stalls and city tours throughout the day. Their efforts paid off. By the evening of 14 June 1991, the strike had mobilised around 500,000 women.

The 1991 women's strike drew attention to the fact that women's work, including housework and childcare, was often underpaid if not entirely unpaid.  In the longer term, this movement aided the adoption of the Federal Act on Gender Equality in 1995, and of legislation allowing abortion within 12 weeks of the woman's last period in 2002 and on maternity leave in 2005, which had been enshrined in the Swiss Constitution since 1945. 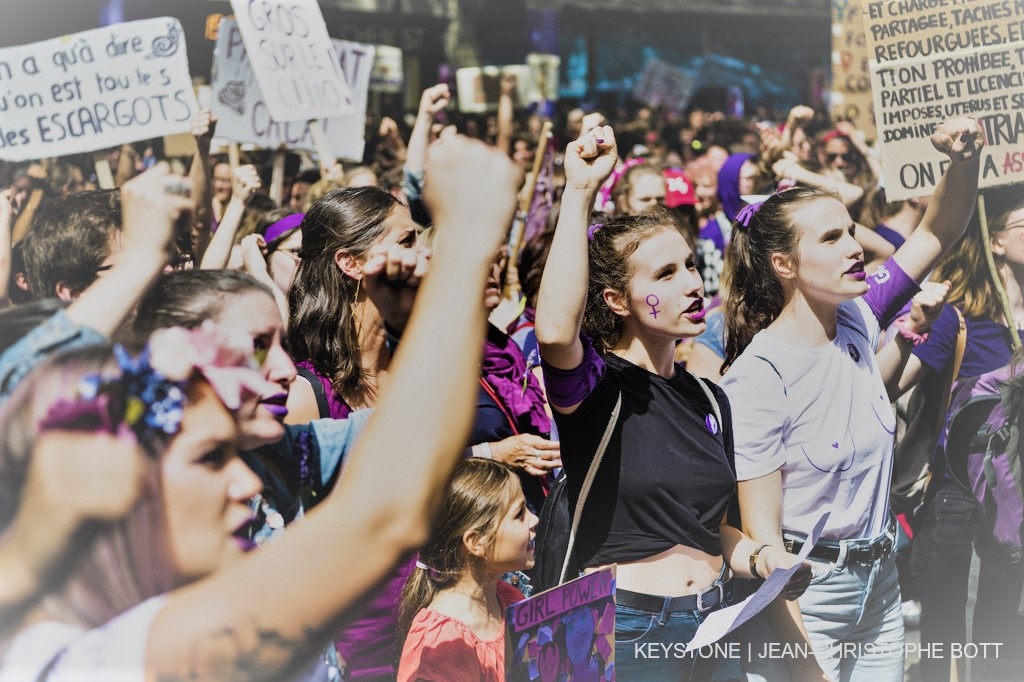 Equal pay failed to materialise, however. So on another 14 June 28 years later women took to the streets in a second purple wave.

The 2019 mobilisation was prompted by trade unions and feminist organisations in response to the 2018 amendment of the 1996 Federal Act on Gender Equality, which does not provide for sanctions for non-compliance with equal pay in companies required to carry out checks.

In addition to 'equal pay for equal work', just as in 1991, women were still asking for recognition for their domestic labour and an end to violence against them.

And men? Many wondered what their role was to be this time around, and this was the subject of some debate for the organisers. Men were asked not to take centre stage. Instead, they were encouraged to help behind the scenes and support the women logistically by taking care of children so that women, childcare providers and teachers of young children could also take part if they wished.

The fact remains that, beyond all these 14 June happenings and occasional demonstrations – however large – the best way to defend your rights and be heard in Switzerland is taking part in politics, by getting up on a podium and campaigning. With this in mind, a group of women from diverse political and professional backgrounds from all over Switzerland launched an appeal to achieve a common goal: equality in political decision-making. Helvetia vous appelle! (Helvetia calls!) kicked off in 2018 as a non-partisan movement for more women in politics.

The initiative complemented the 14 June strike movement by encouraging women to stand for election, offering seminars to women candidates to help them campaign, and lobbying political parties to place women candidates on their electoral lists. The more women on party lists, the better the chances that we will see more women in Parliament.

The spring demonstrations paid off in the autumn:  for the first time in Swiss history, Swiss people elected more new women candidates than men – both to the National Council (the people's chamber) and to the Council of States (the chamber of the cantons).
Out of 200, 84 seats in the National Council are now held by women, who make up 42% of Swiss parliamentarians. In the Council of States, women doubled their number and now hold 12 out of 43 seats. This is not equal representation, but it is a remarkable improvement on previous elections. Above all, these results inspire women to run for political office as Switzerland celebrates 50 years of women's right to vote and to stand in federal elections in 2021.

Typical fauna from the Swiss mountains