The 27-year-old Engelberg native has emerged this winter as the new star of Swiss skiing. She and her older sister Dominique have each won an Olympic gold, while their brother Marc also made his name a few seasons back on Kitzbühel's legendary Streif. Presenting the Gisins: a family of gifted skiers.

After eight years on the World Cup circuit, Michelle Gisin has secured her place in the world of ski racing. The 28-year-old from Engelberg in the canton of Obwalden emerged this winter as the new star of Swiss skiing. On 29 December in Semmering, Austria, she became the first Swiss woman to win a slalom since Marlies Oester in 2002.

She reaffirmed her standing mid-January with a second and a third in the giant slalom in Kranjska gora, Slovenia: not since Vreni Schneider has a Swiss woman made the podium in all five disciplines of alpine skiing.

For a long time I was placing somewhere between 15th and 20th. Which goes to show you should never give up – there's hope for everyone!

In the midst of all the euphoria she made sure to commend her teammate Wendy Holdener, runner-up in the slalom 13 times without ever claiming victory: "Wendy has always encouraged me to do better, and I wouldn't be here without her." Michelle Gisin is the perfect new ambassador for the sport: not only is she smart and speaks five languages, she's also just a really nice person.

We caught up with Michelle on the phone a few days afterwards, as she made her way to the next events in Crans-Montana at the end of January. She was just back from Italy, where she managed to take a break after all the excitement, together with her partner Luca de Aliprandini – also a ski racer – in their house on the shores of Lake Garda. "I was really only about 24 hours with Luca," smiles Michelle, "but it did me the world of good and I managed to recharge my batteries." She always speaks fondly of Luca. Recently when she was asked on TV what her favourite food was, she replied: "Risotto, especially when Luca makes it."

So, we asked, what stands out for her as the best moment in all the excitement she's had this season? She found it hard to pick just one.

I won the slalom in Semmering, and that's where I made my World Cup debut eight years ago. It was like a dream come true and hasn't really sunk in yet. As for the giant slalom, that's always been my favourite of all the races. When I was little, my idol was Sonia Nef, one of the greatest in the giant slalom. So these first two podium places were really important to me.

Michelle is the youngest in a family of talented skiers. Even before her most recent successes, she won gold in the combined event at the 2018 Winter Olympics in PyeongChang, South Korea. Four years earlier, it was her sister Dominique, eight years her senior, who won an Olympic gold in the downhill in Sochi, Russia. Alongside France's Marielle and Christine Goitschel in the 1960s, the Gisins are the only other sisters in the history of skiing to each hold an Olympic gold. Their brother Marc, who twice finished in the top five on Kitzbühel's legendary Streif (in 2016 and 2018), retired last winter. He had never quite recovered following a serious fall two years earlier in Val Gardena. In a poignant farewell the day he retired, he wrote: "I followed my life's passion: I grew up skiing and was willing to die skiing." Michelle has always looked up to her older brother, describing him as 'the pillar of the family and the best big brother in the world'.

Their parents, Bea and Beat Gisin, trained as gym teachers and own a sports shop in the ski resort of Engelberg. It was they who ignited and nurtured their children's passion for skiing. "When my brother and sister went out racing, I used to cry because I couldn't go," Michelle recalled recently. "None of us took up skiing for the glory. We just love skiing in our family." Hugues Ansermoz, former coach of the Swiss women's team, is in no doubt as to the importance of their parents: "They'd come to nearly all the races, without ever getting in the way." Family is clearly very important to Michelle. As she explained, bubbling with energy on her way to Crans-Montana: "I'm so happy to have been born into a family so passionate about skiing. Even though they can't be at the races this winter, because of the virus, I talk with at least one of them every day on the phone. They've always been there for us,  and I owe them a huge part of my success. I would be nothing without them. I'm very close to my brother and sister. They still see me as their kid sister, the baby of the family."

Dominique, who retired from the circuit in 2015, went back to study at the age of 30 and graduated with a physics degree from ETH Zurich. She has a wide range of interests, which keep her busy all the time. Aviation is another of her passions and she holds a pilot's licence. She also has a leading position in the Swiss Sports Aid Foundation. Another role dear to her heart is that of Red Cross ambassador, and her visits to Togo, Bolivia and Nepal left a deep impression on her:

It really makes you think. You realise how privileged we are in Switzerland. Even in these difficult times, this helps put things in perspective.

Throughout her career, her strength of character has always lifted her up again – after no less than nine knee operations. Coach Ansermoz, who had her in his team for a number of seasons, makes no secret of his admiration: "After an injury, skiers usually take a while – sometimes up to a year – to get back to peak performance. They tend to be apprehensive at the start. But Dominique always jumped right back in, same as ever. It was really impressive to see."

Dominique is regularly invited to talk about her experiences, accompanied by her sports psychologist. "There is always great demand, at company events but also village festivals. We're asked a lot of different questions, and that makes it very interesting!" So what's the secret to her resilience? "Above all, it's about passion. Passion is what brought me back each and every time." The two sisters, who skied together for three World Cup seasons, share their open, unassuming and affable nature. Dominique is amazed with what her younger sister has achieved this season. "It's fantastic, but she has worked so hard for this. You need a lot of energy to race in all five disciplines."

So how do they differ? "Compared to me, Michelle has always been more relaxed and easy-going. She takes life day-by-day, calmly – and that's a real strength." Hugues Ansermoz agrees: "Michelle is by nature more outgoing, more extroverted, but she can be extremely focused when she has to be. Dominique is more serious and has extraordinary mental strength. But they are both very friendly and enjoy spending time with others, and they need that too." No one knows better than he how important Dominique has been to her younger sister's career: "Dominique always gave her advice. The day before the combined race in PyeongChang, Michelle fell in the super-G. It was Dominique, there as a TV commentator, who cheered her up, boosted her morale – and we all know the victory that led to."

Michelle Gisin eschews the cliché of the single-minded champion with no other interests than winning:

I like reading and learning languages. It's not like I live in a bubble. I work to be self-sufficient and I can pay my own bills. But I know how lucky I am to be able to go out skiing every day. 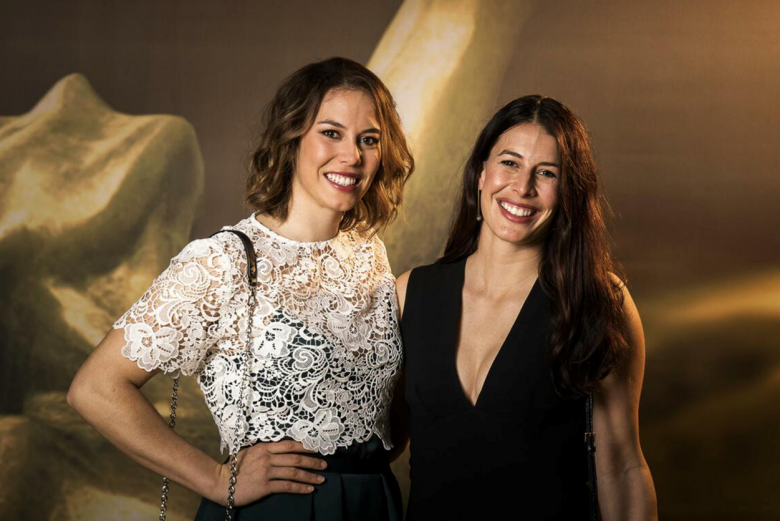 Michelle Gisin eschews the cliché of the single-minded champion with no other interests than winning:

I like reading and learning languages. It's not like I live in a bubble. I work to be self-sufficient and I can pay my own bills. But I know how lucky I am to be able to go out skiing every day.

As an ambassador for Protect Our Winters, an organisation which seeks to raise public awareness of the consequences of climate change, she welcomed last summer's cancellation of the traditional training camp in South America: "I know that travel is part and parcel of the World Cup, but I'm very much aware of the need to cut our carbon emissions. For some time now I've been thinking this camp is crazy, so it was a relief to not have to go." She misses having the spectators around this season but remains positive, as always. "At a time when cinemas and concert halls are closed, sport is the last form of entertainment the public can experience live. It's a breath of fresh air. And it's a privilege we need to maintain." After she won her Olympic gold in 2018, Swiss newspaper Le Matin wrote: "Michelle Gisin loves people the way she loves skiing." And that has not changed.