Moderna, the coronavirus vaccine made in Switzerland

The Moderna vaccine against COVID-19 was one of the first vaccines available worldwide. All doses supplied to Europe are manufactured by Swiss firm Lonza. Read more…

For over a year, the world has been dealing with the COVID-19 pandemic. Several firms so far have developed a vaccine, with the aim of creating herd immunity. US firm Moderna, founded by Stéphane Bancel, is one of the pioneers in this field. It was at the World Economic Forum in Davos, in January 2020, that this 48-year-old Frenchman gauged the looming health crisis. He then decided to split his company in two – a start-up he set up in 2010 which was not a commercial entity before the health crisis: one part continued to produce existing products and the other focused on researching a vaccine, with the aim of having it approved by the world's medical authorities by the end of the year. "It was on 13 January 2020, when the Chinese authorities released the virus sequence to the public, that Moderna scientists first turned their attention to finding a vaccine for COVID-19," explains Dan Staner, Moderna's vice president. "After 63 days of research, our teams found a genetic sequence which they tested on humans. In under a year, we developed a vaccine that is now approved in more than 30 countries."

The firm uses messenger RNA technology in its serum. When introduced into the body, this information molecule carries a genetic message. "Traditional vaccines are produced from a weakened or dead pathogen. When this is injected into the human body, it triggers a response to fight the pathogen and create immunity, rendering it harmless," says Staner, who is also Moderna's director for Europe.

Messenger RNA sends the body the genetic message to produce a specific protein – the spike protein – to defend itself.

Messenger RNA is used to transmit information to our body about the virus's weak points. Our immune system recognises them, produces specific antibodies and, in case of infection, is induced to produce antibodies and fight the virus. This technology has proven to be effective in record time. While its competitors remained unclear about when their vaccines would be available for use, Stéphane Bancel announced in March 2020 to Donald Trump, the former US president, that the Moderna vaccine would be available by the end of the year. "Our teams had been working on messenger RNA technology for 10 years, so the groundwork had already been laid. That explains the rapid availability of our vaccine," says Staner. In December 2020, the US became the first country to purchase and start vaccinating its population with the Moderna vaccine. It was approved by Switzerland on 12 January 2021. 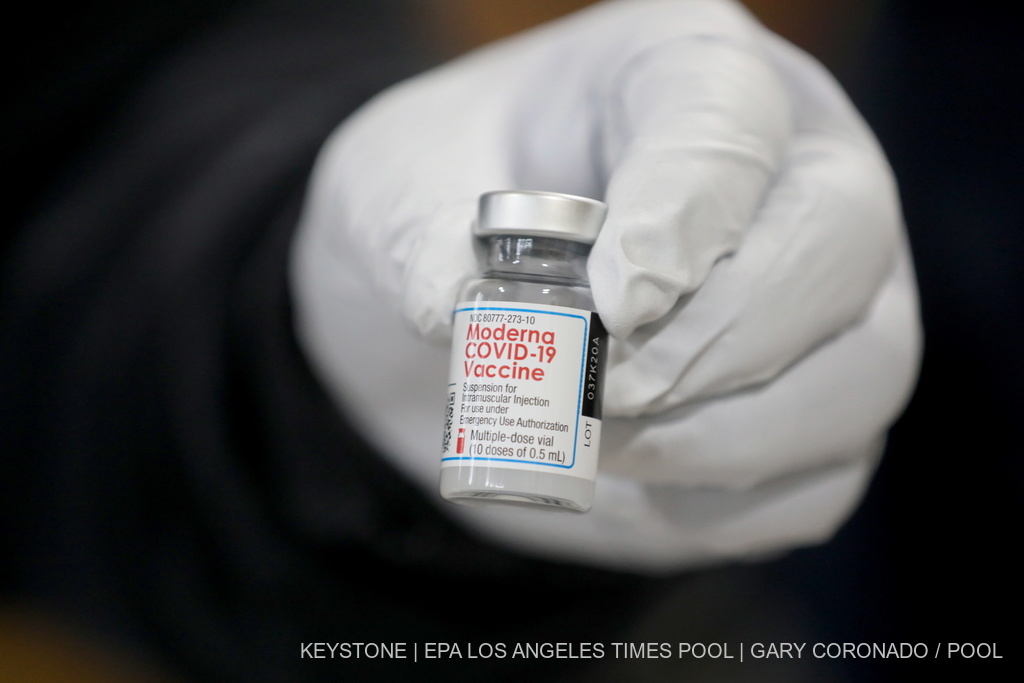 While the doses of Moderna vaccine used in the US are also produced there, the vaccines distributed in Europe are made by Lonza in Switzerland. Located in Visp in Upper Valais, Lonza is known internationally for its chemical and pharmaceutical expertise, including the manufacture of drugs for the treatment of leukaemia. With no factory in Europe to produce its vaccine on an industrial scale, in May 2020 Moderna entered into a ten-year partnership with Lonza. "Lonza is one of the world's leading companies in the development and manufacture of vaccines. This Swiss company combines technological innovation, global production and excellence, so was an ideal partner for our market," says Staner. Thanks to Lonza, which was established in Visp in 1909, the canton of Valais is Switzerland's second canton after Basel for biotechnology. "Lonza is not only an attractive biotech project, it is also the project of an entire region: the development of our company is creating jobs and we already have more than 64 nationalities represented among our employees," says Renzo Cicillini, head of the Lonza site in Visp. The Valais-based company made its mark in the chemical industry before making the switch to biotechnology in 2017, when it built a new dedicated campus at its Upper Valais site. "Our Ibex campus is a laboratory for biotechnology," says Cicillini.

With our technology and know-how, we offer the possibility to develop a product: in the case of Moderna, the production of the active ingredient for the vaccine first went through a clinical phase and small-scale production.

In less than a year, three production lines for the active ingredient of the vaccine have been installed in Valais, where 200 employees are dedicated to the daily production of 800,000 doses. "It was important to us to show that we were capable of finding solutions. Lonza was already known worldwide, but it is true that the fight against the coronavirus has brought us some success and has strengthened our reputation internationally," concludes Cicillini. When operating at full capacity, the three production lines in Visp will be able to produce 300 million doses of the active ingredient of the Moderna vaccine per year.

While messenger RNA technology is currently being used to fight the COVID-19 pandemic, it could be used to combat other diseases in the future. "Our teams are currently developing drugs and vaccines for infectious, immuno-oncological, rare and cardiovascular diseases, as well as autoimmune diseases, using messenger RNA technology," says Staner. "Currently, 24 applications of messenger RNA are in development, including 13 vaccines, which are in clinical trial." Encouraging news that can give us all some comfort.

How high will Switzerland climb up Tokyo’s Mount Olympus?