Elmar Mock - the man with an innate sense of invention

“It is through successive inventions, each one inspiring the next, that innovation contributes to human progress” says the Swiss engineer Elmar Mock. Portrait of a serial inventor, co-creator of the Swatch.

Mock suffered from severe dyslexia at school. The inventor makes no secret of the fact that he was a very poor learner. “It took me 11 years to complete nine years of compulsory education,” he admits. These travails shaped his character, laying the foundation for his life as an inventor. “Since childhood, I have learned to live with failure in an uncertain, haphazard world.” Born in 1954 in La Chaux-de-Fonds to an Austrian father and a Swiss mother from the canton of Valais, Mock has lived a life of twists and turns. He prefers the paths less trodden and never plans ahead – to avoid dulling his curiosity and sharpness of mind. “Invention is a form of discovery,” he says. “We search without knowing whether what we find will be of value in future. Yet, society dictates that we think of tomorrow and plan ahead. We are stuck on a treadmill. Planning kills innovation”.

Mock the innovator knows that the future will always differ from the here and now. And yet, none of Mock’s school teachers would have betted on him becoming one of the most gifted inventors of his generation. After initially training as a watchmaker, Mock earned a graduate degree in plastics technology and began his professional career at ETA where he was part of a young team of engineers. This was towards the end of the 1970s. The budding inventor felt ill at ease in the corporate environment, so he surrounded himself with other creative sparks who, like him, struggled with the conventions of the business world. Shared endeavours like this are at the core of everything Elmar Mock does. “I am always itching to work with other people,” he explains. “It stops me getting into a rut.”

Based on collaboration, he co-invented the iconic Swatch with watchmaker Jacques Müller in 1980. The two men benefited from the assistance of Ernst Thomke, the then CEO of ETA SA. The idea was to develop an ultrasonic welding technique that would help create the Swatch wristwatch. Their invention revolutionised watchmaking, paving the way for a new generation of design-driven analogue timepieces for the consumer market. It also heralded a new beginning for the Swiss watch industry after an era of crisis.

This welding technique would be a common element throughout Mock’s works, finding use in other applications such as bone surgery, the development of water-saving hand washers, and the construction of tiny piezoelectric motors. It also became the seedbed for his company Creaholic, which now develops innovative technological solutions for over 200 clients and has produced nine successful spin-offs.

Established in Bienne in 1986, Creaholic is a think-tank composed of ‘loose cannons’ – inventors who have made it their mission to “imagine the best gadget you have never heard of,” he smiles. “It is through successive inventions, each one inspiring the next, that innovation contributes to human progress.” Creaholic currently has a team of around 50 people who specialise in a wide range of fields. In just over 30 years, Creaholic’s inventions have resulted in 178 patent families. “This output has been a collective effort,” he insists. “Inventors never operate in isolation. If they enter the spotlight at some point, it is because of all the people they work with.”

Therefore, Mock’s nomination for the prestigious European Patent Office (EPO) prize for lifetime achievement is recognition not only of his trailblazing, pioneering work, but also of his gifts as a networker. The announcement genuinely came out of the blue for him. Not only that, but he almost missed the news completely, because the EPO letter announcing the nomination nearly ended up in the wastepaper basket. Launched in 2006, the European Inventor Award is, according to the EPO, one of the most prestigious competitions of its kind, paying tribute to the creativity of inventors around the world. The nominees work in a wide variety of fields and are divided into different categories such as industry, research, SMEs and lifetime achievement.

Reward for a lifetime of achievement

Mock, the only Swiss among 14 finalists hailing from eight different countries, is not interested in the limelight. “Inventors tend to remain in the background,” he notes. However, these momentous few weeks are reason enough for him to deliver a message to young people: “My advice is to keep going. Look at what has already been done in the past and use it now as inspiration to discover and innovate.” The award selection process relies on the work of EPO experts. However, it is an independent international jury that will determine the identity of the winners to be announced at the award ceremony in Venice on 15 June, evaluating innovations not only on their technological originality but also on their economic and social impact. The European Inventor Award also includes the Popular Prize. Members of the public can vote for their favourite inventor every day until 11 June. 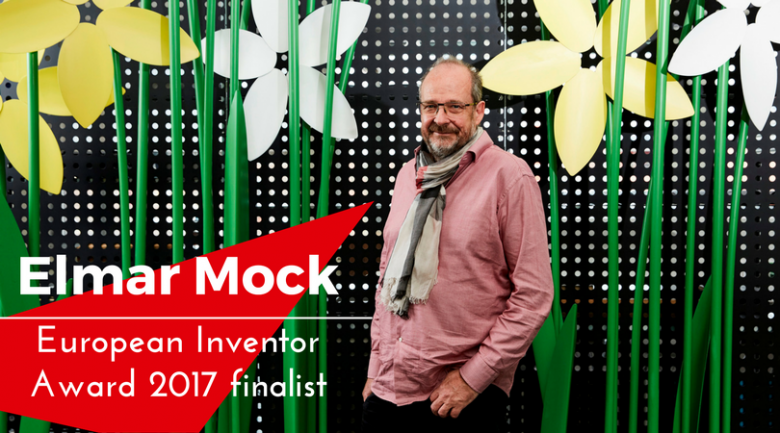 As the ceremony approaches, Mock is not showing any nerves. This nomination is a pleasant surprise. “I am just thrilled to be going to the party in Venice,” he explains. And he is modest as ever. “I have no idea about my next projects,” says the inventor, whose thoughts are never too far from watchmaking. “I just go with the flow.” He is delighted to talk about the disruption that connectivity has injected into the watchmaking sector. “Watches used to be the metronomes that paced our day. Now we schedule our lives differently. Time still matters to us all, but we will see a change in the way we use watches and a departure from the usual manner in which they are worn. In future, our wrists will no longer be the only body part on which we keep the time. Hence, we can no longer define watches on the basis of how we wear them.” At age 63, Mock continues to keep an eye on such turbulences and stay ahead of the game.

Until the 11th of June, vote once every day for Elmar Mock!